We have just spent the weekend in Devon.

Richard's parents are downsizing from the large family house they retired to fifteen years ago to his late grandma's rather bijou two bedroom flat down by the seaside. It's a good move, but it's cruel as it entails throwing away lots of possessions and boxes of stuff that they have accumulated over the years.

Several boxes of Richard's stuff were moved with his parents and have spent fifteen years in the loft. His life has not been the poorer without them, and yet, it was important that he had the chance to look through them before they were consigned to a tip.

I know how difficult this process is from emptying my mums house last year when we sold it, and so just as he was there to support me, here am I to say the words " Bin it" quietly, but firmly in his ear.

What I wasn't expecting was to be touched by anything that he found myself. Yes, it was great to see pictures of him as a Cub Scout. Yes, I've seen his graduation pic. Yes, it was good to see his cuddly toys from childhood. A firm goodbye and they headed skipwards. Then he found letters. Letters that his parents had written to him when he was at university, and letters that I had written to him when we first fell in love.

I have to say I had no recollection of the letters until I saw them, and then it came flooding back. No domestic email in the mid nineties. Just a sealed envelope sent every other day from Pimlico to Cambridge saying how our time together that weekend had brightened my life. They also had hints of me working things through for myself. I was approaching forty when I met Rich with no serious relationships behind me, and he changed my life. The letters are clear about this, and it was strange to stand in a bedroom in Devon and see my emotional state of some seventeen years ago exposed so clearly.

I always used to love writing letters , and in an way, I suppose, that is what this blog has become, an occasional missive to those who want to read it. I remember writing letters to friends who had gone to Stratford for the year entitled "Paul's letters to the Thespians". My adorable friend Janie tells me she has some letters I wrote to her while she was at drama school, and I'm sure there are others locked away in cupboards and boxes elsewhere.

Dear friend Loraine has a brilliant blog running at the moment where she is slowly telling the story of how her parents met in the war through their letters. It's gripping, moving and intensely revealing of a time in history and a slice of society. Check it out at withlovefromgraz.blogspot.com.  It's well worth a read.

I don't think I'll be publishing mine. I think of them as romantic. Rich told me they were soppy. (I've long accepted that's his word for romantic!) but he kept them. He put them away and kept them, and even though they have spent fifteen years in a box in a loft in Devon gathering dust while our relationship has gone from strength to strength, through good times and bad, he's got them back now and its good for both of us to be reminded of just how we started out together.

Now where's that letter to my MP I was writing?

Popular posts from this blog 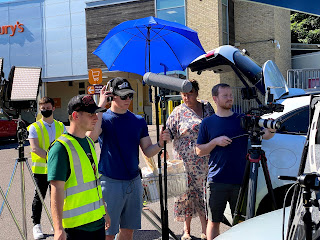 So now I am at the other end of the tunnel. Except that it wasn’t a tunnel other than in terms of tiredness. The three weeks of filming I have just been through with my director’s hat on has to be one of the most joyous experiences of a long career. From calling action on our first slate in a school in Wandsworth to picture wrap on the upper floor of a restaurant in Gillingham, the entire experience was a joy. First and foremost, the weather blessed us.After the horrendous weather of May, the bank holiday allowed the sun to shine,and it continued to bake down on us for the entire shoot. We had one drizzly Friday when mercifully we were shooting indoors, but for the rest of the time as a unit we bought shares in Ambre Solaire, and Panama hats. Lucky to have an army of runners keen to hold several umbrellas whenever necessary. I remember one afternoon taking to thestreets of Forest Hill to film our leading man walking up a steep incline andtalking to camera. This involves a large frame b
Read more

The Twilight Of Incompetence

October 04, 2020
For the last couple of weeks I have been lucky enough to be viable. Creating a virtual conference for a major global brand which will eventually go live this Thursday. It’s been a long, but engaging process with many ups and downs, but I’m very grateful for its part in my life. Otherwise, like so many of my peers, I would have no contact whatsoever with the world in which I work. I’ve been out and about filming and spending days in the studio, and if one tends to ignore the sight of people’s face-masks, and the Covid Marshall vigilantly keeping an eye on our distancing, it would seem to have been work as usual. Yet every day there has been a feeling in the pit of my stomach that I should be at home. I am 63 years of age and the government would term me to be mildly obese. Lockdown hasn’t helped and a hitherto subdued passion for chocolate digestives has risen to the fore. Having the time to cook decent meals hasn’t helped either, and both lunch and dinner have often featured a dessert
Read more

Patience is a virtue. 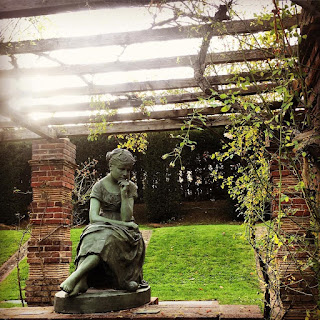 I’m not a patient person. I never have been. Waiting is not my forte. If I want something, I want it now. At this time of year, it can be an infuriating trait. My partner has often heard me express needs and wants in the months leading up to Christmas and made a mental note how exciting it would be for me to find that item in my Christmas stocking. His disappointed irritation is quite understandable when he finds that two or three days later, the aforementioned object of desire arrives from Amazon. I just couldn’t wait for it. One quality that would stand all of us in good stead at the moment is patience. I heard a wonderful saying yesterday that seemed so apt on a day when the government once again played with our lives, as though we were of no worth. The phrase was “I haven’t come this faronly to come this far.” I’ve had no support from the government, and I am grateful that I am not in a position to be desperate for it, but that’s only because I have been lucky enough to continue to
Read more